Cross-stitch is the oldest form of hand embroidery, dating back to the Middle Ages, and is found all over the world. As its name suggests, cross-stitch is a double stitch diagonally crossing intersections of the horizontal and vertical threads of the fabrics. It is completed on canvas-type fabric, like Aida cloth, in which the strands can be counted, or stitched on an evenly woven fabric, like linen.

The Cross Stitch Guild has a great article by Jo Verso "Threads of History", which states in part:

“It is known that cross-stitch embroidery flourished during the Tang dynasty in China (618-906 AD), when it may well have spread westward along the trade routes. By the eleventh century, the most famous of all early embroideries, the Bayeux tapestry, was being worked. This is not actually a tapestry in the strict sense (that is, a woven textile), but an embroidery, depicting the Norman invasion of England in 1066. In Spain, under the influence of the Islamic civilization of the Moors (756-1492), blackwork was popular - this technique is thought to have influenced the development of cross-stitch. Blackwork featured geometric designs on white linen, using the wool from black sheep, and it is believed to have been brought to England in the sixteenth century by Catherine of Aragon, the Spanish first wife of Henry VIII. In Eastern Europe at this time, folk art was flourishing, and cross-stitch was used to embellish household items using geometric and floral patterns still found in pattern books to this day. But cross-stitch really came into its own with the working of samplers.”

Since there were not any pattern books back then, stitchers would keep samples of their favorite stitches and patterns on long strips of narrow cloth, hence the name “sampler”. The “samplers” were not intended to be put on display, instead, they were rolled up and kept safe, as there were many stitches and patterns kept all together. When printing began in Europe, the popularity of embroidery included pattern books for cross-stitch and blackwork. The stitcher would count the pattern onto the fabric or prick holes in the pattern and transfer the design through the holes using colored powder.

The earliest surviving dated sampler was stitched by an English girl, Jane Bostocke, in 1598. The inscription commemorates the birth of a child, Alice Lee, in 1596, who was her cousin. The sampler contains a variety of patterns, rows of border motifs, and also randomly placed motifs. 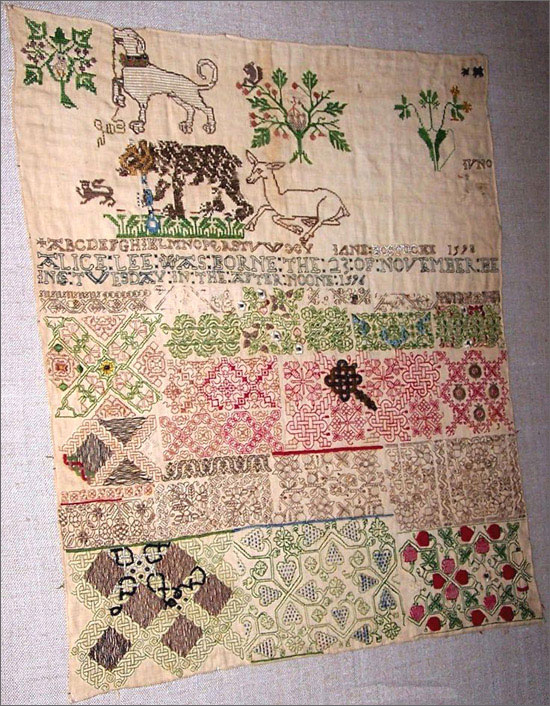 As pattern books became more available in Europe and America, the function of samplers began to change to educational. Children were taught needlework skills by stitching the samplers. Samplers also became a popular way for moral verses and such to be stitched and displayed. As the years went by, the samplers became more decorative and more artistic. During the 1800s, sampler making and cross-stitch went into a decline. In the 1960s, cross-stitch was re-discovered and continues to offer something of interest for all tastes and skills.

Traditionally, cross-stitch was used to embellish items like household linens, tablecloths, dishcloths, and doilies (usually only a small portion would actually be embroidered, such as a border). Although there are many stitchers who still stitch in this fashion, it is now increasingly popular to work the pattern on fabric and hang it on the wall for decoration. Cross-stitch is also often used to make greeting cards, pillowcases, or as inserts for box tops, coasters, and trivets.

Today, cotton floss is the most common embroidery thread used for cross-stitch, composed of six strands that are only loosely twisted together and easily separable. As mentioned in the beginning, fabrics such as Aida and linen are used for cross-stitch. These fabrics are categorized by threads per inch (referred to as “count”) which range from 11 to 40. The count of the fabric determines the size of the finished stitching. If the count is 11, then the finished design will be larger than on a count of 18. Modern cross-stitch patterns have guides for finished stitching sizes.

How to Frame Embroidery

Our “Welcome” linen framed picture is comprised of the Welcome, Sampler Ribbon Bow, and Butterfly Accent designs from the machine embroidery collection A Touch of Cross-Stitch #12346. The embroidery collection features 20 classic cross-stitch designs. A tearaway stabilizer is the best choice for stabilization. Polyester embroidery threads are used to stitch the designs giving them a more shiny appearance. Use cotton threads for a more classic look.

Following are step by step instruction for stitching out the design and placing it in a picture frame:

Hoop the linen fabric with two pieces of tearaway stabilizer. Place on embroidery machine and stitch out design. 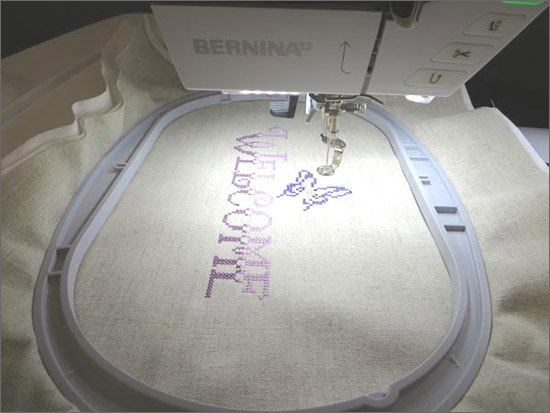 After the design is finished stitching out, remove one layer of stabilizer. Press the fabric, as it will have a hoop ring.

Place the design in the picture frame. Put the back in place. Display your new “Welcome” linen framed picture! 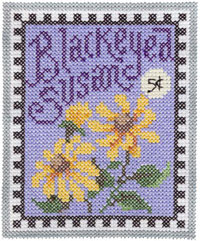 You can create your own sampler or picture using these designs from A Touch of Cross-Stitch #12346. Stitching the design on the embroidery machine is a nice option when time is a factor, as the process is much faster, and the results are fabulous. Consider embroidering cross-stitch for samplers, pictures, or other projects.

This material is © OESD, LLC and may not be reproduced or published without permission.