Cutwork Embroidery is a technique where specific areas of fabric are cut out along buttonhole stitches or satin stitch outlines. Cutwork is sometimes referred to as ‘Embroidered Lace’ because of its open appearance. There are different types of Cutwork. The most popular is Broderie Anglaise. It is a form of whitework embroidery in which round or oval holes are pierced in the fabric and the cut edges are then overcast. The holes or eyelets are grouped in a pattern. Traditionally, Cutwork Embroidery was used for table linens, collars and cuffs and stitched in white thread on white fabric.

This technique originated in the 14th, 15th and 16th centuries in Italy. It came from drawn thread work which was originally produced by nuns for textiles for the church. Instead of removing individual threads, the nuns began to remove large areas of the background fabric. When the Roman Catholic Church expanded, the poor were employed to embroider church vestments. These workers began to embroider their own linens and thus the technique began to expand. During the Elizabethan era, cutwork was incorporated into the design and decorations of some ruffs. It migrated to other areas and nations and they developed their own names, such as, Richelieu, Broderie Anglaise, Spanish cutwork, Hedebo, and Jaali work which was prevalent in India. Cutwork was highly valued by royalty and nobility. Here is a picture of a handkerchief made in Italy about 1600. 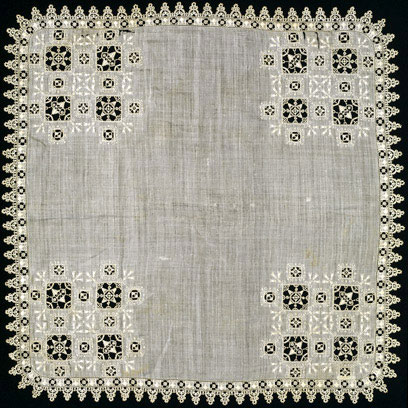 Cutwork embroidery works best on a firm, tightly woven fabric, such as linen or cotton that is not as likely to fray. For the traditional technique, by hand, stranded cotton or silk threads were used.

Let’s take a look at how Cutwork Embroidery is created on the embroidery machine. The supplies needed are:

Now that you’ve had a short introduction to Cutwork Embroidery, I hope you will give it a try for some of your upcoming projects. Your friends and family will be so impressed with your handiwork! Let us know what projects you made using the Cutwork Embroidery technique. Send your pictures to support@oesd.com.

This material is © OESD, LLC and may not be reproduced or published without permission.